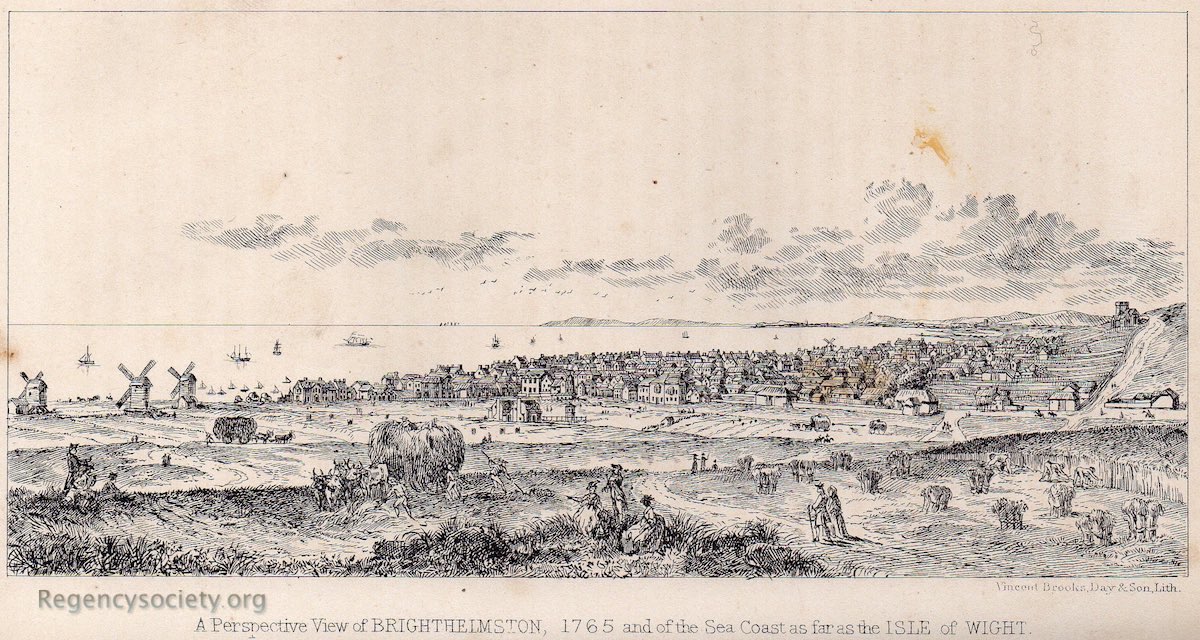 There is a close-up available of this image: Click here to view the detail

Lithograph by Vincent Brooks after James Lambert. Printed by the lithographers Day & Son, published by John Beal, East Street, Brighton and illustrated in The History of Brighton and Environs by Henry Martin. Lambert first had a large copperplate engraving of this view published in conjunction with Robert Sayer of Fleet Street, London, in 1765. This plate was then republished in 1817. In c1849 Arthur Wallis published a slightly smaller lithograph, and finally in 1871 this small Vincent Brooks bookplate was published. Of the original copperplate edition, Images of Brighton notes that it was the earliest engraved view of the town.

The two windmills to the left are on the East Cliff, and below those and nearer to us, Lambert seems to have portrayed himself painting the view. To the right of the mills is Russell House, and just to its right is Woodgate’s Library, with the line of small arches to its facade. To the right of the library, and fronted by a low fence, is Brighton Manor House, owned by the joint Lord of the Manor, Richard Scrase, from 1771. A little further inland we can see Marlborough House, overlooking the Steine. On the far right of the scene, the wide trackway leading up to St Nicholas Church is Spring Walk, so called because it led from the Steine up the Chalybeate, now St. Ann’s Well Gardens. Church Street was later established along this route of Spring Walk.

The first edition copperplate engraving is listed in Images of Brighton 23 and illustrated on page 17. This later version is not listed.