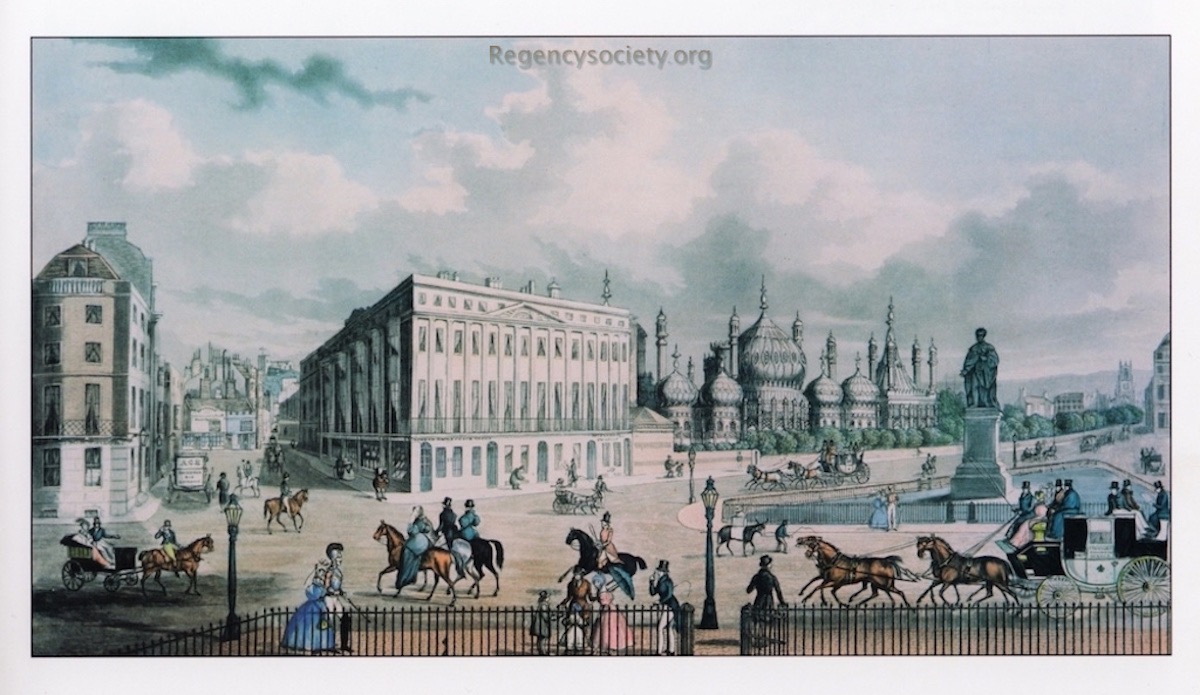 Hover over the image to zoom 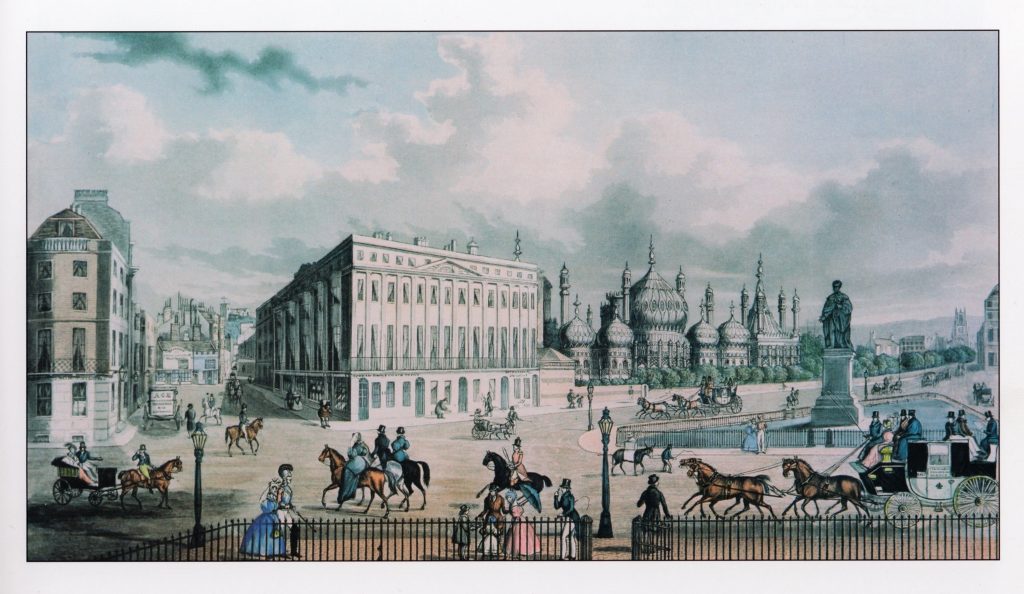 This close-up is intended to illustrate in particular how Castle Square (to the left in the distance) had more of the dimensions of a square than it does today, and leaving the square from the top right-hand corner is a rare 19th century view up North Street, with a view of St Nicholas Church on the hill in the distance.

Copperplate aquatint engraving, hand coloured but with the sky printed in blue. Drawn, engraved and published by the local artist John Bruce, c1834. One of very few prints that shows St Nicholas Church as well as St Peter’s. At the far side of Castle Square is the Blue Coach Office and beyond Castle Square is a very rare 19th century view looking up North Street.

The building with the central pediment, left of the Pavilion, is the residential terrace on the corner of the Steine and Castle Square which replaced the Castle Hotel in 1824. It was a terrace of houses, with shops/offices on the ground floor, and canopies over their windows. It stood on the earlier site of the Castle Hotel, behind which the Castle Assembly Rooms were converted into George IV’s private Royal Chapel (see Images of Brighton no: 880 and Set for a King by Mike Jones, p 96). The size of this building, in such a dominant position close to the Pavilion, caused the Town Commissioners to seek legal advice as to whether it should be pulled down. On the near corner with Castle Square the building has the offices of the Spread Eagle Coach Office, and on the far corner, nearest the Pavilion, is Mr Fisher, a dentist. By 1850 it became Needham’s Drapery shop (selling ladies’ and men’s clothing) and the premises were taken over by Selfridges in the early 1930s. The building was known as ‘Needhams’ during the latter part of the 19th century, but prior to that it does not seem to be named in any prints of the Steine. The land for this new building was acquired at the time by a Dr Hall for £5,000, and it is a reasonable assumption that he was the developer. It was demolished by the late 1930s to make way for the present office and showroom block, first occupied by the Electricity Board but now a bank premises.

In The Keep (their reference DB/B/73/33) is correspondence relating to the plans for this new carriage road (included in the print’s title) from Castle Square to St James’s Street, and the threat of a Chancery action by residents who objected.

William Hallett was born in Rotherfield, 10 April 1794 and was recorded as living in Brighton by 1811, working as a carpenter on the Royal Pavilion. By 1825 he has his own building business with 150 men working for him. He became Brighton’s second mayor in 1855 and was appointed the town’s chief magistrate that year, then again in 1866/67. Also in that decade he was one of the twelve Aldermen of the town. He built St John the Baptist RC church in Bristol Road, and the Bristol Hotel c1835, on Marine Parade, which he owned. He also founded the Kemp Town Brewery, built 19 and 20 Sussex Square for the Marquess of Bristol, and was on the committee that ran Brighton Races. He died at 142 Marine Parade on 3 April 1862.

Illustrated in A History of the Royal Pavilion, Brighton by Henry D Roberts. Country Life 1939. Illustrated opposite page 81.