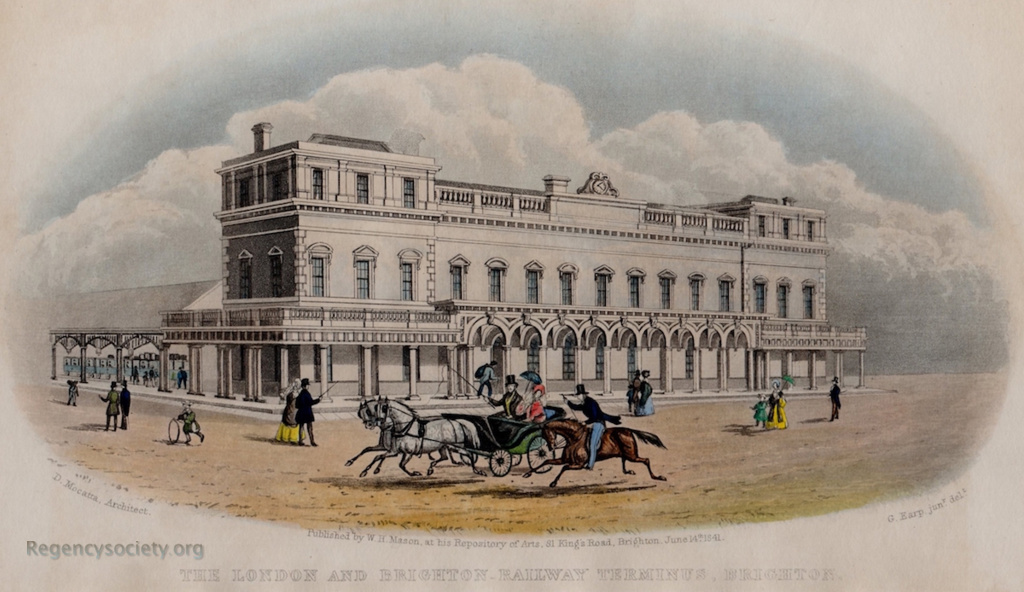 Aquatint engraved by George Earp Junior after the original drawing (BPC00376) by the architect David Mocatta. Published by W H Mason, June 1841, about three months before the London line was actually declared open on 21 September that year, at which time the station was the largest public building in Brighton. This image is before the Trafalgar Street Bridge was built. Before the station itself was put in place, Queen’s Road did not exist. There was no roadway going south from the site of where the station was to be built. The original name for the much shorter road going south from where North Road is now was Windsor Terrace, with the narrow southern end of that roadway being Air Street which took the traveller down to Wykeham Terrace (see the entry for Hanover Chapel, BPC00119). There is a very small section of Air Street left today. Apart from Air Street, there was no other entry onto the western end of North Street from the north. The road layout was changed in 1850 by Act of Parliament, whereby the section of new road from the station down as far as North Lane (now North Road) was called Queen’s Road, and the road south from North Lane retained the name of Windsor Terrace for a while, until it all became Queen’s Road.

Brighton was lukewarm to the first proposals that it should have a railway connection to London – the fifty or so daily stage and mail coaches had served the town well. But eventually the Town Commissioners, of which there were 112 at this time, agreed to this new link to the capital. The decision transformed the town. During 1837, the stage coaches brought 50,000 visitors to the town over the whole year. At the height of the summer season in 1850, the trains brought 75,000 visitors in a single week. And, of course, with this cheaper form of travel, it was a very different social mix. The Brighton line was electrified in 1932/33.

But by 1850 there were already problems on the Brighton line with which we are familiar today. John Howard Turner, in volume 2 of his history of the London, Brighton and South Coast Railway 1978, noted that there were many complaints about late running of trains and poor standard of locomotive maintenance, and that inadequate carriage cleaning got the Brighton line a bad name. One passenger’s letter is quoted: ‘ … many of the carriages are totally unfit for a respectable, modest female to enter, to see the different inscriptions and accompanying drawings on many of the panels. I can only say that if the company were to have their carriages cleaned, these things could not remain so obnoxious to the eye for more than one journey’.

By 1877 the Handbook for Travellers to Sussex, published by John Murray of Albemarle Street, London, wrote of the first-class hotels in the town ‘all … of course high in their charges’ and ‘It is, however, at all times an expensive place of residence, the cost of living and house-rent being at least one third more than in London’.

See all images of the railway