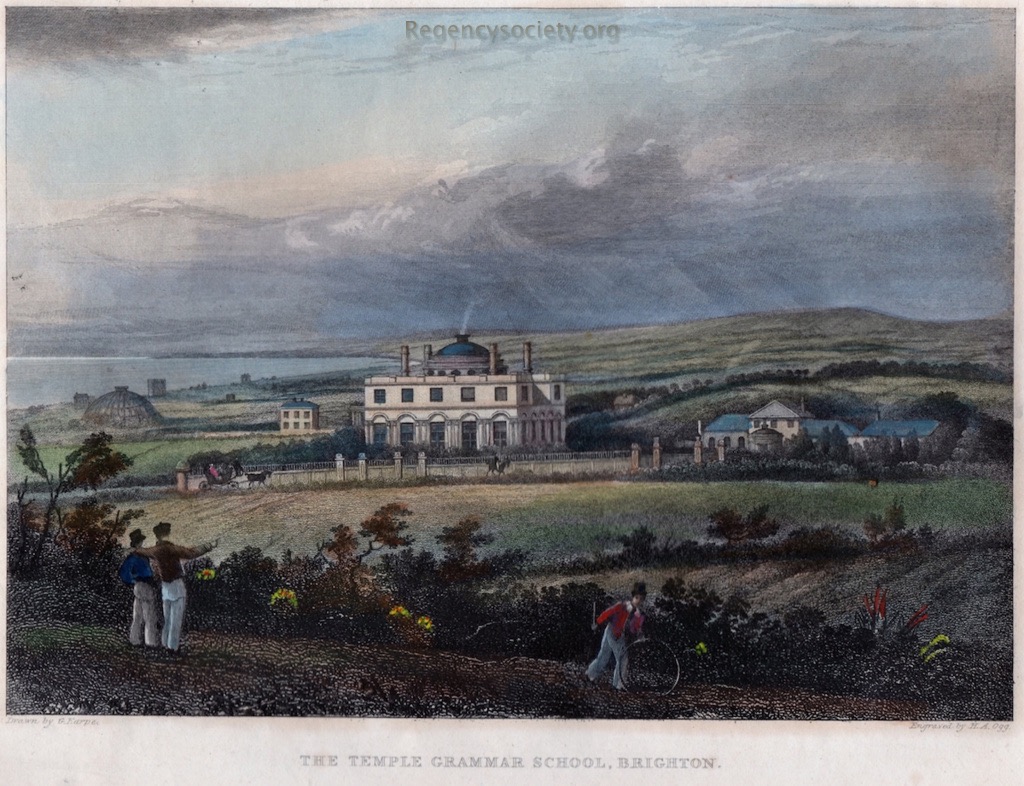 Steel engraving by H A Ogg after George Earpe and published in the Rev Horsfield’s History of Sussex in 1835.

The Rev Thomas Walker Horsfield (1792-1837) was a nonconformist minister and important topographer who wrote The History, Antiquities and Topography of the County of Sussex in two volumes. With many illustrations, it became a standard reference work for later Sussex historians. When these two volumes appear in book dealers’ lists, the prints are often described as ‘copperplate’ engravings, but they are on steel.

In this view the artist is standing on Dyke Road where the junctions of West Hill Road and Clifton Road are later built. The view is of Kemp’s Temple on Montpelier Road. Kemp had altered the elevation of his house by putting in the four tall chimneys and, by this date of 1835, it had been a gentleman’s academy run by the Rev Robert Fennell for about six years. Kemp had moved to one of his houses in Lewes Crescent. The Temple looks very different now, but the listed flint wall surrounding it can still be seen unaltered today.

In the left distance is Wick House, the home of the Rev Dr Everard, who was involved in running the Chapel Royal. His house was pulled down in 1938/39 and the Furze Croft flats now stand in its place. On the left margin the large domed structure is the Anthaeum, built by the botanist Henry Phillips to house tropical and oriental plants. Constructed of glass and cast iron ribs, it was larger than the dome of St. Paul’s and St. Peter’s in Rome, but too ambitious a structure, and on the morning of 30 August 1833 the whole dome collapsed. It lay in ruins for twenty years until the building of Palmeira Square was started. The artist had obviously included it in his drawing, done before 1833, and not removed it for publication a couple of years later.

Also illustrated in The Victorian Development of the Clifton, Montpelier and Powis Estates of Brighton by Steve Myall. Pomegranate Press, 2008, p 112.

See all images of schools