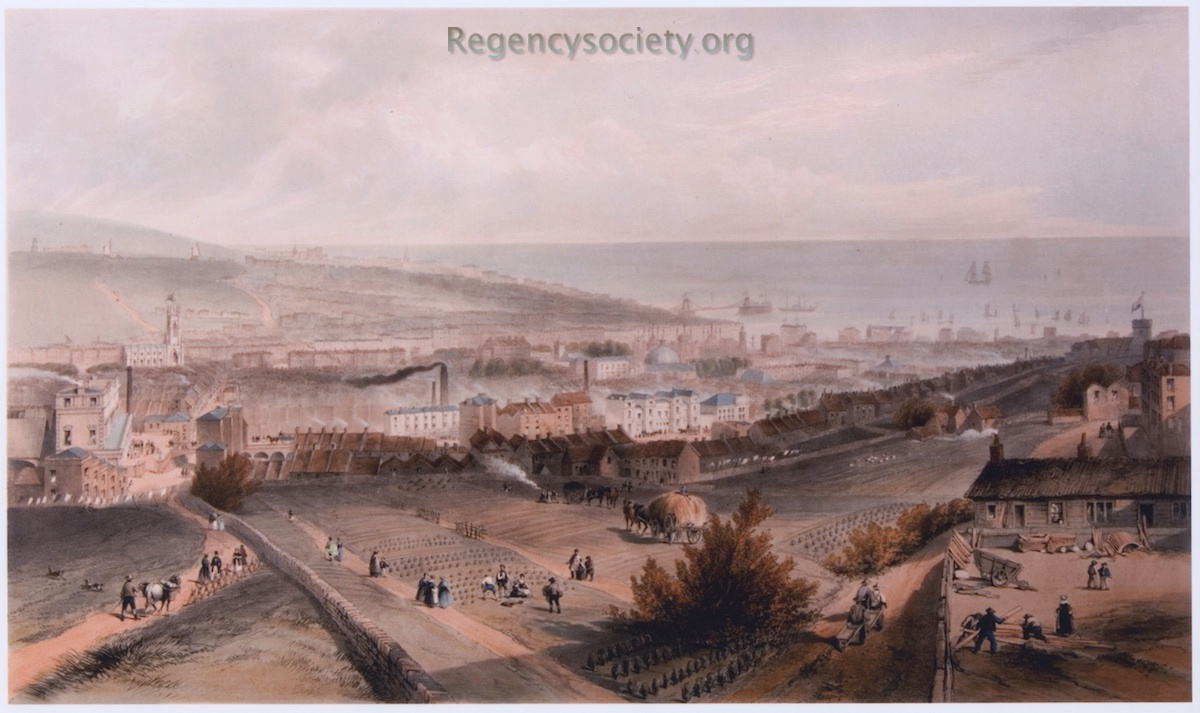 Lithograph by C Childs after Richard Henry Nibbs. Published by W Lane, Market Street, Brighton, 1 January 1846. The artist is standing on the later site of West Hill Road, which was where Hudson’s Mill was located. The tower of St. Nicholas Church, with the flag flying, is on the skyline in the far right distance. In front and to the right of the church are the three gable roofs of the back of the Workhouse, and in front of that, on the right hand edge of the picture, is the tall red-roofed building of the Infirmary, with the three side windows in a vertical line, and the sun shining on the upper part of the side wall. This is the only known image of the Infirmary in a Brighton print. All workhouses throughout the country were obliged to have an infirmary, and in the eighteenth century institutions they were part of the main building. By the early nineteenth century, for the purposes of better infection control, they were usually separate buildings. This image shows the land on which Buckingham Road, St Nicholas Road, Albert and Alfred Roads were later built. Also depicted is a line of roofs descending away from the church in the right-hand middle distance, which is Kew Street running into North Gardens. Exactly twenty years later that view would be obscured by St. Nicholas Road. On the far left is Brighton Station beyond which St. Peter’s Church can just be seen. In the left hand foreground, the diagonal footpath with the flint-stone wall runs across where Albert Road is today, and it seems to join up near the top of what is now Guildford Road but at this time was called Terminus Terrace, the houses of which can be seen leading down the hill to the station.

Illustrated in The Victorian Development of the Clifton, Montpelier and Powis Estates of Brighton by Steve Myall. Pomegranate Press, 2008, p 23.

Images of Brighton 47 and illustrated on page 133.