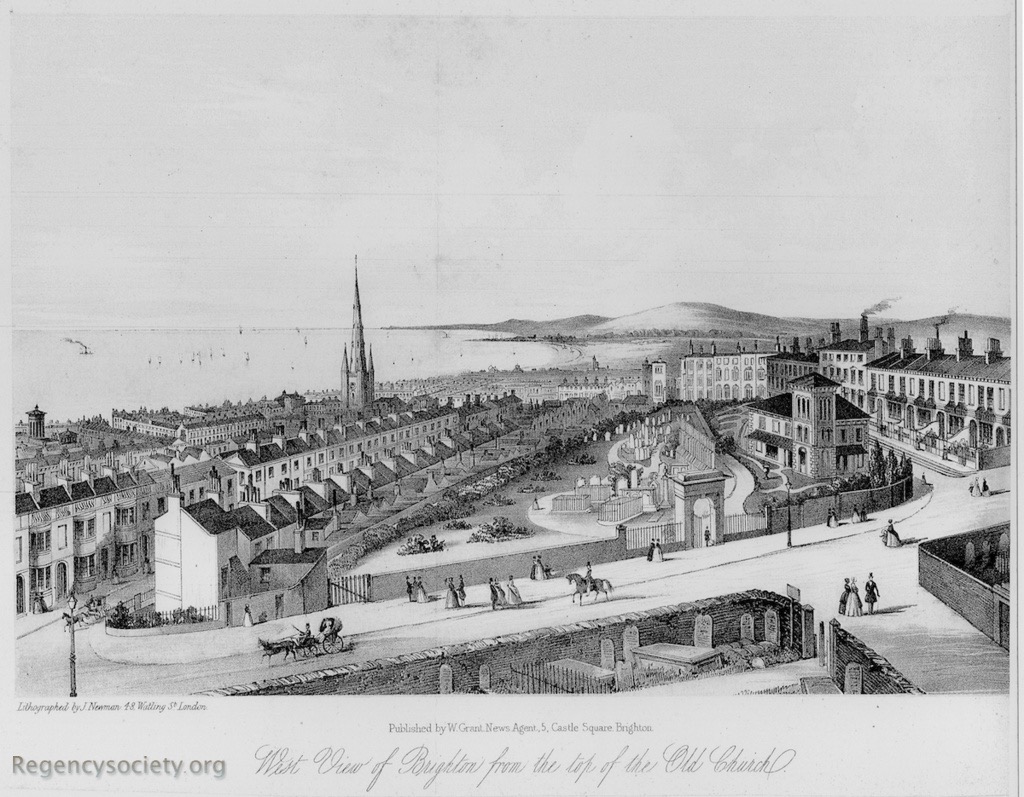 Lithograph by J Newman and Co, London. Published by W Grant, Castle Square c1850. The original watercolour is in the British Museum.

This scene shows Dyke Road in the foreground (known as Church Hill at this time), the beginning of Upper North Street is bottom left, and on the right-hand margin is one of only two 19th century views of Clifton Terrace, just a couple of years after it was completed. Just below the Terrace is the large detached house, Norman Villa, which still stands today as an educational establishment. The spire is of Christ Church, Montpelier Road and the back of Regency Square is depicted, just left of Christ Church. For compositional reasons, the spire of Christ Church is taller than it should be and is therefore occasionally mistaken for the Catholic church of St Mary Magdalen. However, the building of St Mary’s was not started until 1861. It was built on the site of Henry Tulett’s timber and stone mason’s yard at 47 Upper North Street.

At the near end of Upper North Street, on its south side, the terrace of homes is broken by a flat-fronted, single roofed building with no chimneys. These are the Chalk Pit Island Tenements, listed in the Poor Rate Book of 1844 (ESRO BH/B/4/35/2). They are noted as being between Regent Hill and Regent Row and were named after a chalk pit that was on the opposite side of the road in the early 1800s.

Looking at Clifton Place at the far end of Clifton Terrace, there is a gap in the terrace of houses going down the hill. This gap is now filled in, but it was the site of a proposed street, with the intended name of Alfred Place, which would have continued on in the direction of Clifton Terrace and joined up with Victoria Street, almost opposite Victoria Place. The street was never developed but it explains the single house, halfway down Victoria Street, which is set back behind the main run of the terrace on the east side of the road.

Also illustrated in The Victorian Development of the Clifton, Montpelier and Powis Estates of Brighton by Steve Myall. Pomegranate Press, 2008, p 34.

Images of Brighton 49 and illustrated on page 27.