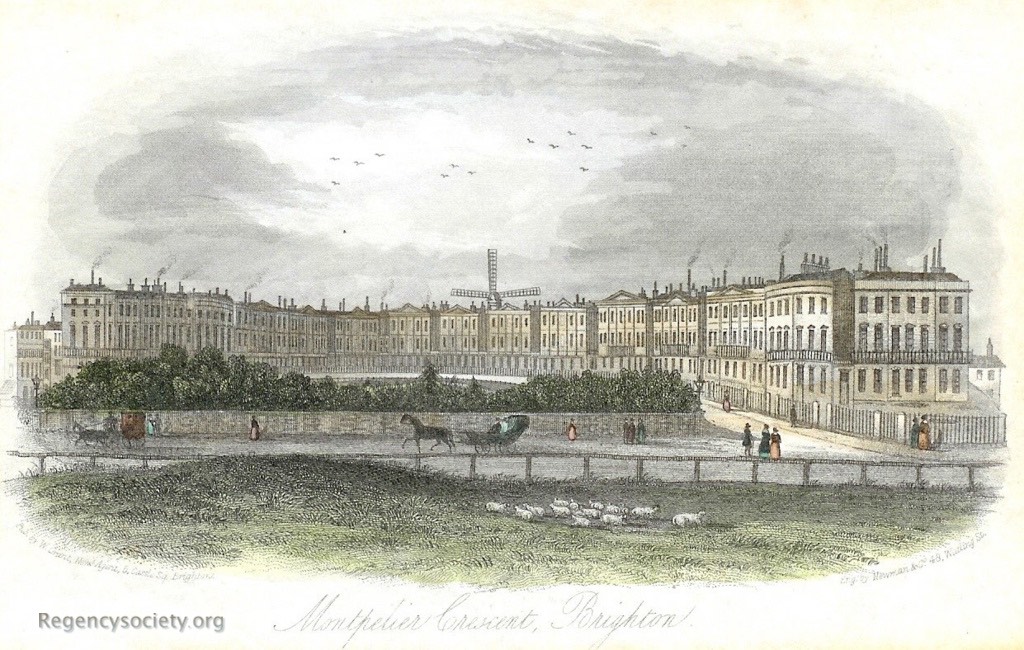 The windmill is Hudson’s Mill, where West Hill Road is today, in place from 1806 to 1866, when it was demolished. The site of today’s Montpelier Crescent was the Temple Field’s Cricket Ground, also known as Lee’s Trap or Lillywhites. The ground was first played on in 1831 and closed in 1844 although the building of the Crescent had started in 1843, with the building work continuing until 1847. Sussex played an All England side on this cricket ground in 1842, which was the first recorded ‘benefit match’ ever played, for W Frederick Lillywhite. He had leased the land for cricket from Thomas Read Kemp in 1836, but the venture was a failure and in the end he found success playing for the MCC rather than for his home county of Sussex.

The house on the far right in the middle distance is John Yearsley’s home, Clifton Villa, 7 Clifton Hill, on the corner of Clifton Road. Yearsley was the developer of the Clifton & Powis area, and the fact that this house could be seen, as the Crescent Inn had not yet been built, dates the print to the mid-1840s.

Note the sheep in the foreground, echoes of the earlier pasture land. The Crescent also seems to have a boundary wall, similar to Hanover Crescent, but no sign of a wall exists today. On the far left some houses on Dyke Road can be seen, just as they come to the junction that was to become the Seven Dials. Today the injudicious planting of trees completely obscures one of only two Victorian crescents in Brighton. Montpelier was designed by A H Wilds, built between 1843 and 1847, and holds a very important place in the architectural history of our city. Robson & Macdonald, in their book  A Guide to the Buildings of Brighton, 1987, describe A H Wilds as producing ‘powerful and attractive Regency buildings well into the Victorian period’

This scene is also published in a smaller size and is one of only two engraved images of Montpelier Crescent. Musgrave in his Life in Brighton describes the Crescent as being on ‘the grandest scale in all Wilds’s work’, and Professor David Robson describes the Wilds father and son, together with Busby, as playing ‘a significant part in the final stages of the last great period of architectural consensus in this country’.

Illustrated in The Victorian Development of the Clifton, Montpelier and Powis Estates of Brighton by Steve Myall. Pomegranate Press, 2008, p 114.

Both images of Montpelier Crescent: 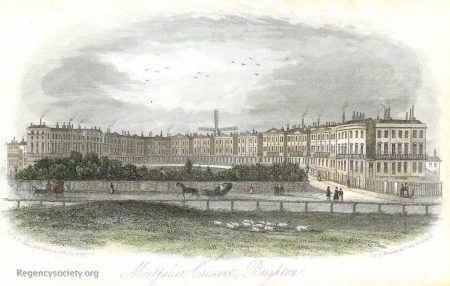 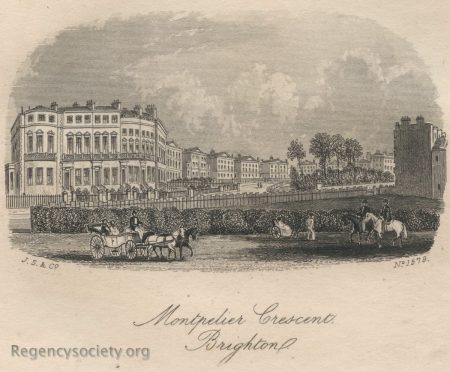