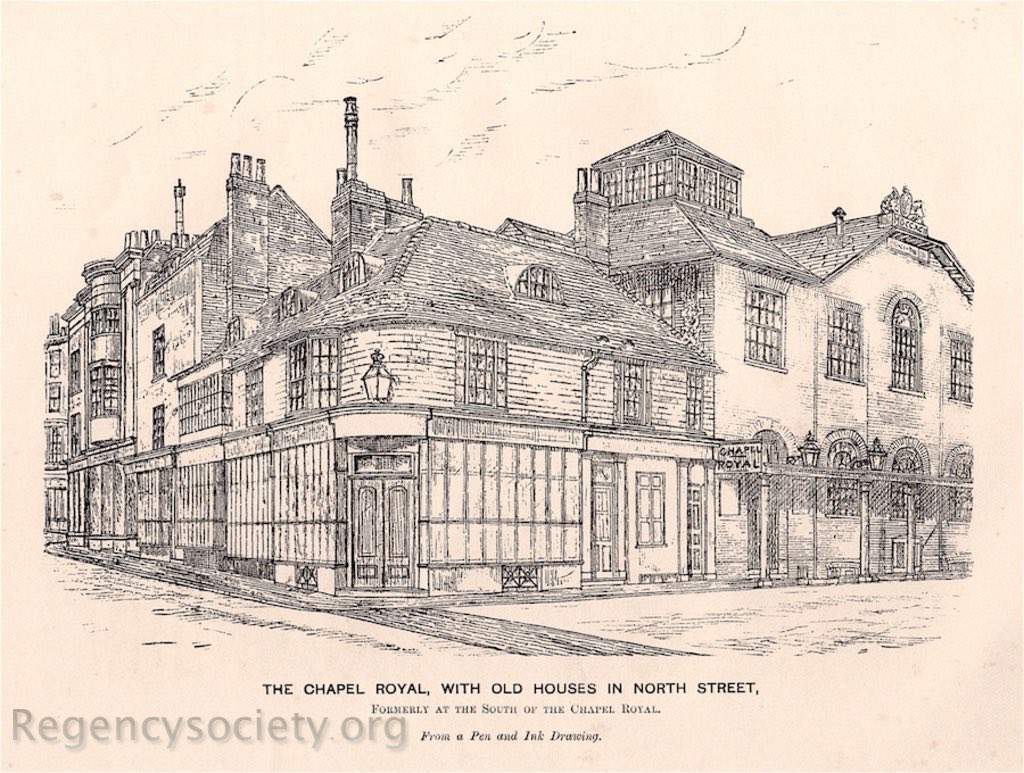 Wood engraving from J G Bishop’s ‘A Peep into the Past: Brighton in the Olden Time’, 1880 and republished 1892.

While in Brighton the Prince of Wales did not attend St. Nicholas Church, so the vicar of Brighton, the Rev Thomas Hudson, raised money to buy land near the Pavilion, and built a chapel of ease. He employed the London architect Thomas Sanders to design the new building in North Street and the foundation stone for the Chapel Royal (the above illustration) was laid by the Prince in 1793. It took two years to build and in its early years the chapel was only open during the season, from June to September. The Prince rented a pew for 13 Guineas a year but stopped attending after hearing what he thought was an objectionable sermon.

By 1822, as King, George had created his own Chapel (with a connection to the Pavilion: BPC00114).  In the meantime, the fabric of the earlier Chapel Royal, which Prince George had abandoned, was deteriorating, and by 1876 was in a poor state of repair, with the shops on its southern edge (the buildings on the corner site in this view) being demolished to widen North Street. At this time the architect, Arthur Blomfield, re-arranged the building, taking out an interior gallery, putting up the new red-brick facades and the clock tower we see today. In 1897 the Chapel Royal was designated a parish church for a small area around the Pavilion estate. The young Winston Churchill was a member of the congregation for a few years in the early 1880s.

Click here to view full entry for this image