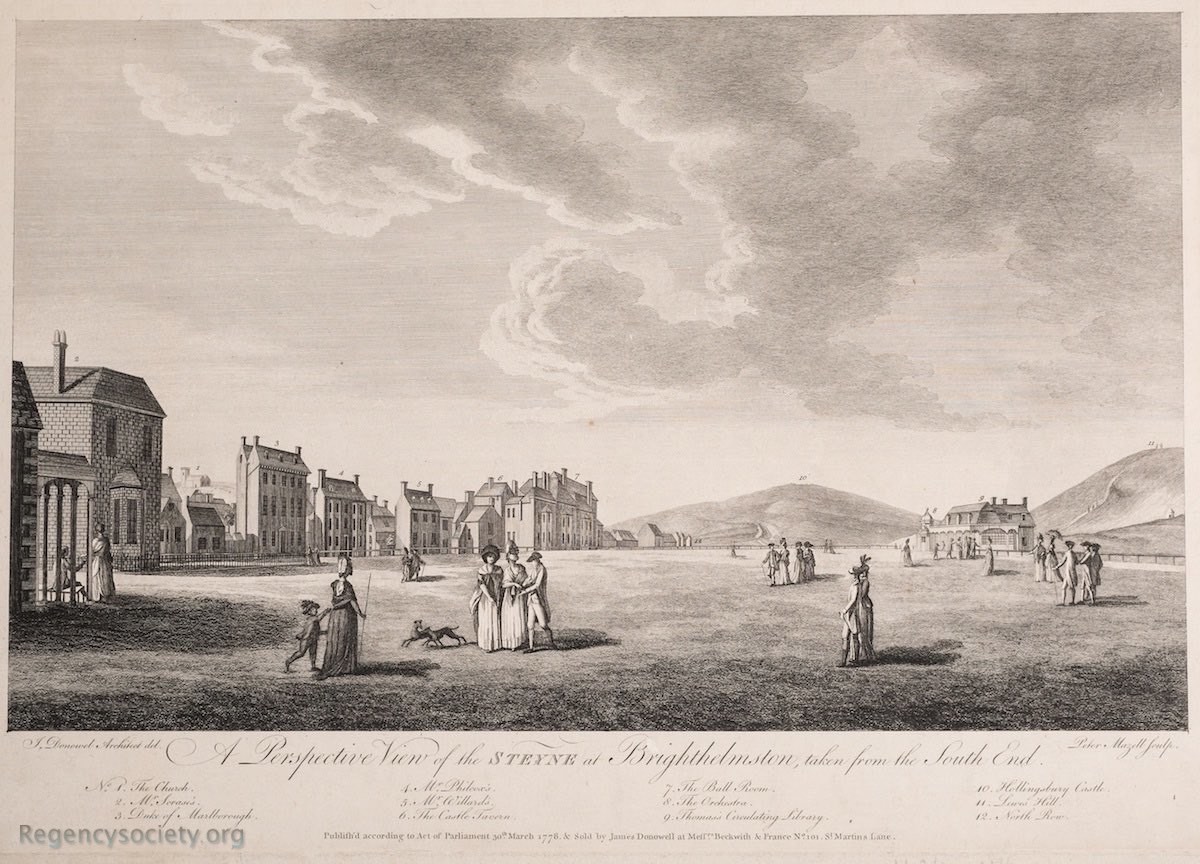 Copperplate line engraving by Peter Mazell after James Donowell, published by the artist with Messrs Beckwith and France, London, 30 March 1778.

The plate was published with a numbered index in its lower margin, pointing out, among other buildings, Mr & Mrs Scrace’s home, the Duke of Marlborough’s house that he had bought from Samuel Shergold, and Shergold’s own Castle Tavern, together with Thomas Baker’s circulating library, the building on its own to the right.

Marlborough House was built by Samuel Shergold c1769, but seems to be unnamed at first. It was much narrower than today’s house, with a red-brick facade and four storeys. There are no specific engravings of this early house, but it does appear in the James Donowell print of A Perspective View of the Steyne at Brighthelmstone, in the year 1778, from the South End (see BPC00392). While it was built to enable Shergold to accommodate fashionable visitors (he already owned the Castle Hotel, the other side of the Old Steine) it is thought to have been something of a speculative build, and he sold it to the Duke and Duchess of Marlborough in 1771. The Duke sold it on in 1786 to W G Hamilton MP (1729-1796) who engaged Robert Adam to make major alterations. Robert Adam virtually rebuilt the house, taking off the top floors and extending towards the south. We can only conjecture how much influence for this change came from Hamilton himself when he purchased the house from Marlborough and gave the rebuilding commission to Adam. On the ‘History of Parliament’ website is a quote of 1792 from Lord Charlemont about Hamilton: ‘There was a man whose talents were equal to every undertaking and yet from indolence … he has done nothing’. His death in 1796 was said to have come just in time to save him from absolute poverty.

Soon after Hamilton died, the house was purchased by Lady Anne Murray: it is featured as her home in a Thomas Wise engraving of 1806. In Attree’s Topography of Brighton and picture of the Roads from thence to the Metropolis, published in 1809, it is also referred to as ‘The Mansion of Lady Anne Murray …  justly considered as the first in Brighton’. During occasional summer seasons the Princess of Wales stayed there. Interestingly, in the Thomas Wise print and the Attree guide, it is no longer referred to as ‘Marlborough House’. More research needs to be done on the owners after Lady Murray, and at what stage it regained its historic name of ’Marlborough House’.