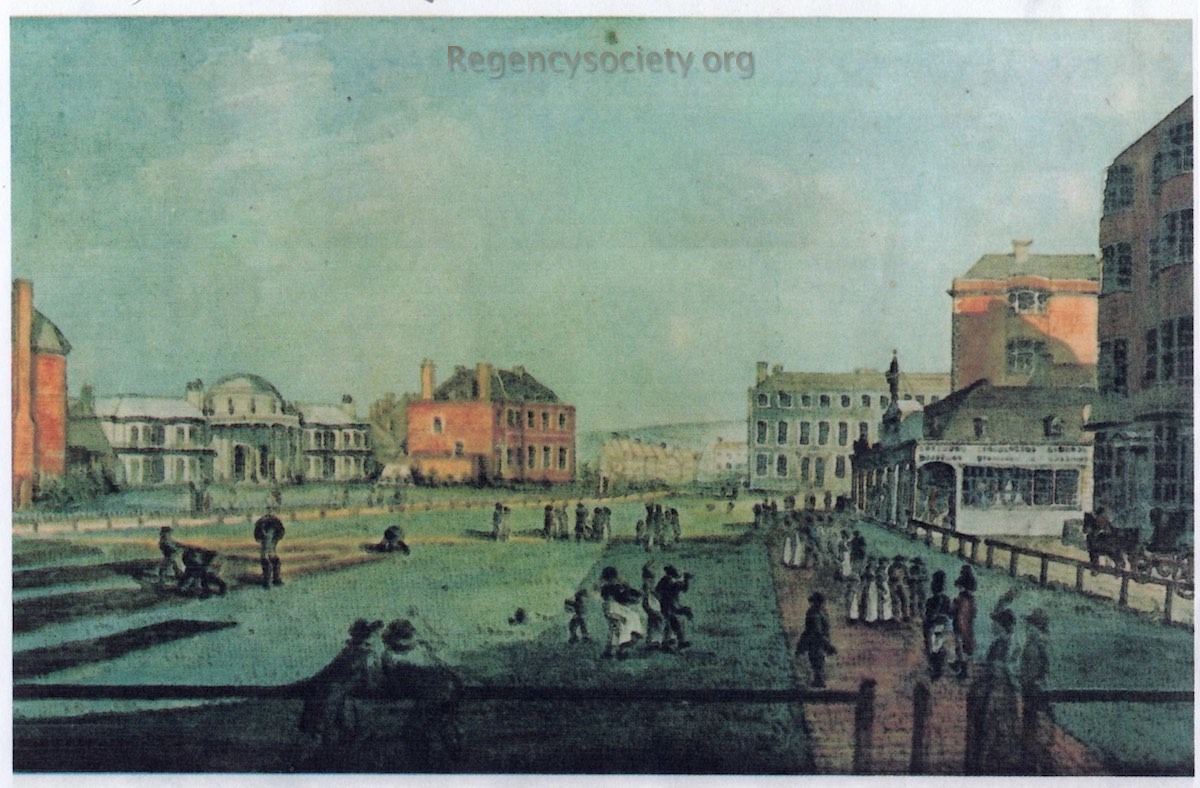 A copperplate engraving after Jacob Spornberg. Thought to have been published in 1798 from a watercolour dated 1796.

The Pavilion shows Henry Holland’s original design: the building on the left margin is the Castle Hotel’s Assembly Rooms, owned by Samuel Shergold who also built Marlborough House overlooking the Steine. These Assembly Rooms became the Royal Chapel for George IV. In W Saunders’ 1839 Stranger’s Guide in Brighton it is noted that this chapel was only open during the residence of the Court at Brighton (infrequently during Victoria’s reign) and admittance was by ticket only. The Chapel Royal, a different building not in this scene, was erected in Prince’s Place, off North Street, in 1793, and, with much rebuilding in the 1880s, is still there today. By 1803, when the parish church of St Nicholas was viewed as too small to accommodate the town’s many visitors, the North Street Chapel Royal became the chapel of ease to the parish church. The Chapel Royal was occasionally attended by the Prince of Wales, until he converted the Castle Assembly Rooms into his own private Royal Chapel.

The red-brick house to the right of the Pavilion is Grove House which the Prince of Wales purchased in 1812 and demolished in order to extend the Pavilion estate northwards. Marlborough House, in the Steine, gained its present name when the Duke of Marlborough purchased it in September 1771. But Marlborough sold his Steine house, purchased Grove House, and changed its name to Marlborough House. So until the Prince of Wales purchased and demolished the second one in 1812, Brighton had two houses called ‘Marlborough’. On the other side of the Steine from Grove House is the short terrace of houses called the ‘Blue and Buffs’, two of which still stand today.

Just in front of the ‘Blue and Buffs’ is Donaldson’s Royal Circulating Library. It was originally Baker’s then Gregory’s Library, but Donaldson was the next owner and rebuilt the single-storey library into a grand three-storey edifice in 1806. It stood on the corner of what was to become St James’s Street, going east from the Steine.

Illustrated in Royal Pavilion: An Episode in the Romantic by Clifford Musgrave. Leonard Hill Books, 1959, after p 34.

See all images where the weather plays a role