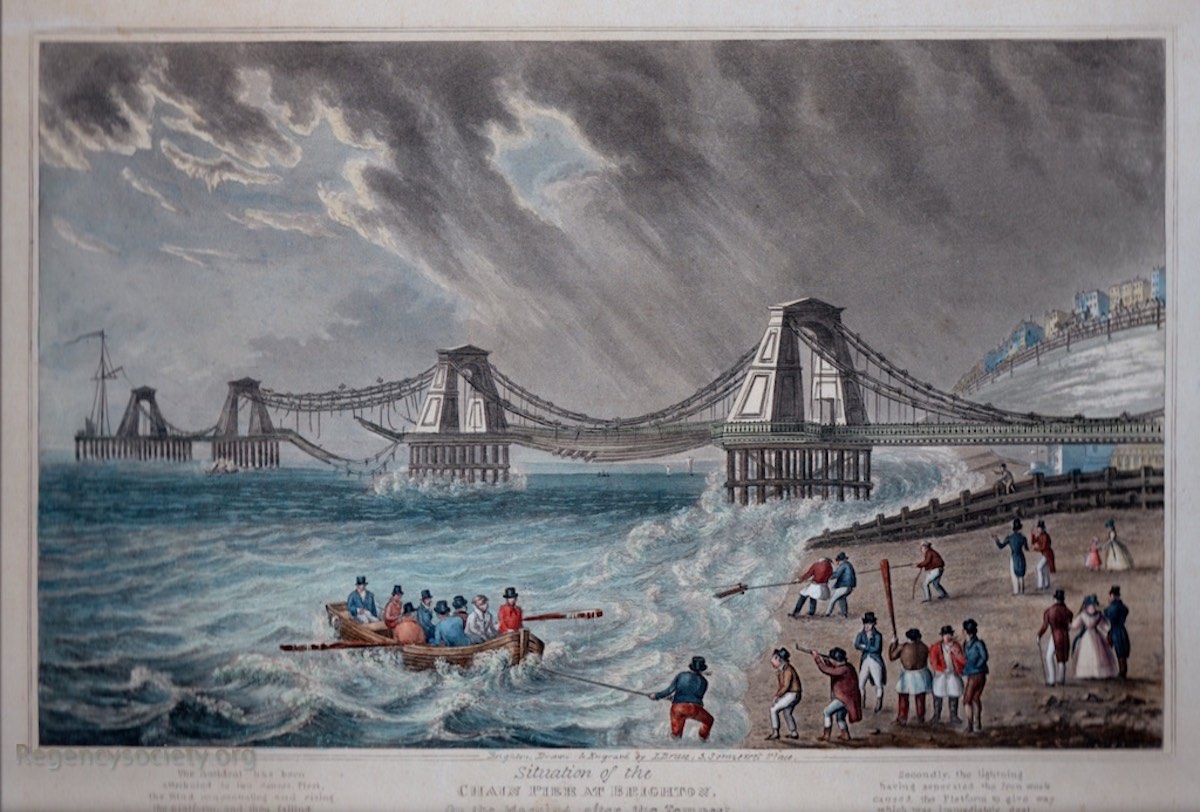 The storm of 1833 was the first to cause substantial damage to the pier. There had been two previous storms, in 1824 and 1828, then 1836 saw another damaging storm. There were eight engravings published showing the 1824 storm. One was published showing the storm of 1828, but was in fact a reprint of an 1824 storm scene. Seven prints were produced illustrating this 1833 storm, then two of the storm in 1836.

J G Bishop in A Peep into the Past: Brighton in the Olden Time describes the earlier 1824 ‘Birthday Storm’ as ‘one of the most violent storms that ever occurred on this coast, but apart from some cracking in the wooden flooring and some ornamental parts falling, the pier itself stood like a rock’. This was all the more remarkable as the storm happened during a period of the highest spring tides.

The 1833 storm, the subject in this print, occurred at low tide, but the pier was struck by lightning which Bishop wrote was ‘seen to descend upon the pier, run along the platform and at the centre develop into an awful blaze’, leaving Bishop to describe the event as ‘a disastrous and appalling accident’. A subscription for repair was opened at a meeting the following day, when £200 was raised, then a house-to-house collection raised a further £1,200 and the pier was made ‘stronger than ever’. This repair to the pier was a considerable achievement when we read Bishop’s description of the damage in his publication ‘The Chain Pier in Memoriam’. Bishop wrote ‘The second bridge was a ruin, hanging down within a few feet of the water. At the third there was a gaping chasm . . . for the space of 30 or 40 feet the whole of the woodwork, the platform, the iron railings, suspension rods etc., had totally disappeared. The third pair of towers was forced out of their perpendicular, and the fourth bridge bellied down some 18 inches to the sea’. This was all repaired, and despite another serious storm three years later, when again the third bridge fell into the sea, the structure lasted for another 53 years, until it had to be closed for public safety reasons in 1889.

When the Chain Pier was finally destroyed by the storm on the night of 4-5 December 1896, there was no intention of rebuilding it, so everything from it could be disposed of. Laurie Keen in The Argus Magazine of 2 April 2011 writes: “A report in a Brighton paper read ‘Quite a profitable trade has been done this week in relics of the Chain Pier – chips, nails and scraps of iron having been vended by enterprising beach-men”.

Illustrated in ‘Old Brighton: A Collection of Prints, Paintings and Drawings’ by Eileen Hollingdale. George Nobbs Publishing, 1979. Illustrated on page 77.

View other images where the weather plays a major role