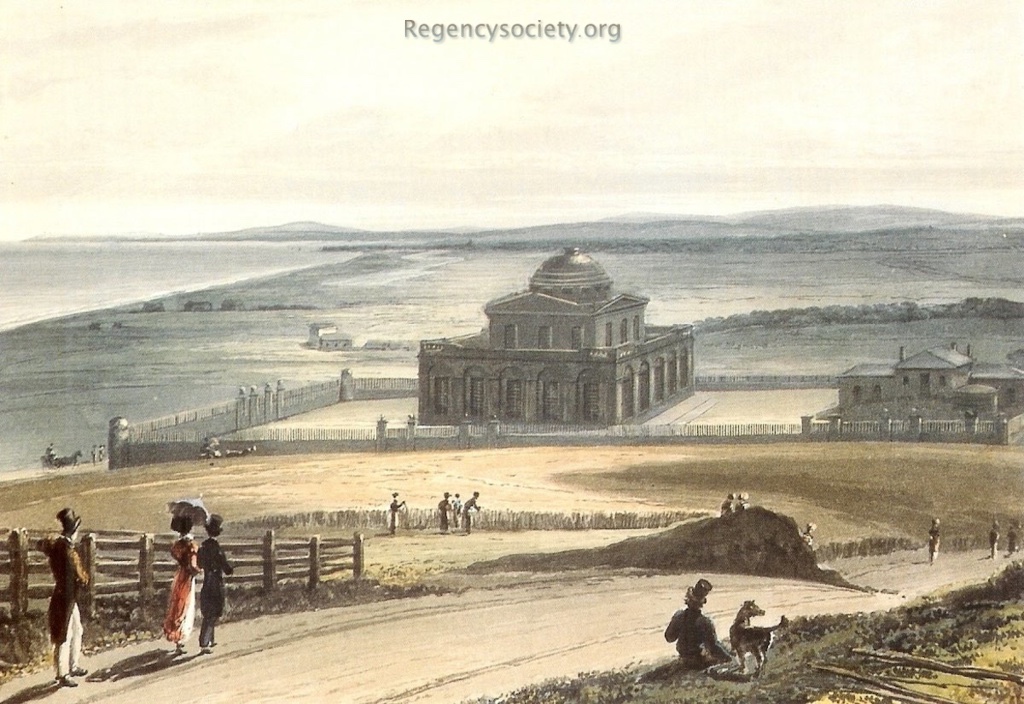 Aquatint engraving by and after William Daniell, published in his Voyage Round Great Britain of 1823: the paper is watermarked ‘J. Whatman Turkey Mill 1823’.

This scene shows Thomas Read Kemp’s new house in Brighton, the Temple, on Montpelier Road; in the foreground is the trackway that became Clifton Hill, and left of that is the cornfield on which Powis Square and Powis Villas were built some 23 years later. The fencing that surrounded Vine’s Mill can also be seen. The couple in the left foreground is probably the young Mr & Mrs T R Kemp, with their butler in attendance, walking back to their home, the Temple, built on Montpelier Road just four years before this print. The natural inlet of Shoreham Harbour is seen in the distance.

Of course, there is no such place in the Brighton area with the name ‘Ovington’, and Daniell had obviously confused the house with that of Nathaniel Kemp’s at Ovingdean, so its incorrect name may have a simple explanation. When in the area, Daniell stayed with Thomas Read Kemp’s uncle and trustee, Nathaniel Kemp, who lived at Ovingdean Hall, midway between Brighton and Rottingdean to the east. The Temple is towards the west of central Brighton. But Daniell was preparing hundreds of sketches all around the country, so he may understandably have made the wrong association with the image. He incorrectly noted on the original drawing that it was the home of ‘N. Kemp’ rather than ‘T. Kemp’, and then probably recalled the name as being the ‘Oving’ part of Ovingdean, and the ‘ton’ part of Brighton, so arriving at the strange name of ‘Ovington’. Whether or not this is the correct reason for Daniell’s mistake does not detract from the fact that this is the only nineteenth century engraving of the road that became Clifton Hill, together with the Powis land before its development. With the artist standing on the highest point in the area, near the much later site of the old Royal Alexandra Children’s Hospital on Dyke Road, this 1823 view covers much of the land on which the Clifton, Montpelier and Powis roads were built. The cornfield being harvested in the middle distance is now the site of Powis Square, Powis Road and St. Michael’s Place. The present Victoria Road would later be built to the left of the cornfield and Montpelier Road runs across the print, in front of the Temple.

Illustrated in The Victorian Development of the Clifton, Montpelier and Powis Estates of Brighton by Steve Myall. Pomegranate Press, 2008, p 157.