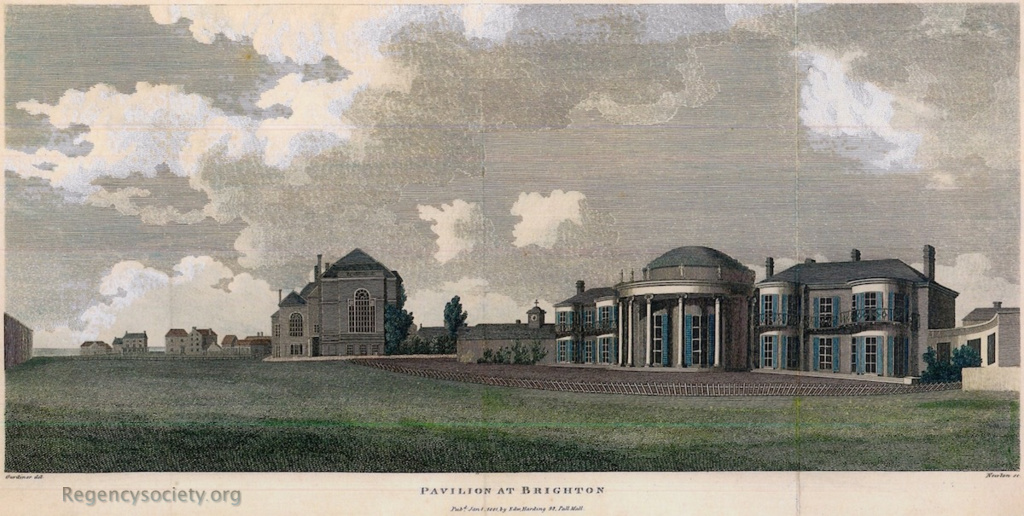 This view shows the original Marine Pavilion, designed for the Prince of Wales by Henry Holland. It started life as a farmhouse, of which there are no contemporary prints, purchased by the Prince from the Kemp family in 1787. Holland’s building was finished by 1788 and cost £22,000. The large building to the left is the Castle Assembly Rooms, attached to the northern side of the Castle Hotel. In 1815 the Prince started the lengthy process of buying the Castle Hotel, converting its ballroom into his own Royal Chapel and, by September 1819, the Royal York Hotel was opened at the south end of the Steine to give the town a new and larger ballroom. This project with the Castle Hotel and the Assembly Rooms continued into the first couple of years of George’s reign. It expanded the Pavilion estate to the south, and at the same time he purchased Grove House (by this time renamed as the second Marlborough House), thereby extending his estate to the north. In 1800 he had already purchased land to the west that was the Promenade Grove, where his riding stables were built by 1805.

Holland was a founder member of the Architects’ Club in 1791. He had started remodelling Carlton House for the Prince of Wales in 1783, and before that was finished he had taken on the building of the Prince’s first design for a Marine Pavilion.

Royal Pavilion: An Episode in the Romantic by Clifford Musgrave. Leonard Hill Books, 1959, after p 34.

Life in Brighton from the earliest times to the present by Clifford Musgrave. John Hallewell Publications, 2nd edition, 1981,after p 64.

Images of Brighton 390 and illustrated on page 43.

See all images of the Royal Pavilion Estate

Royal Pavilion. There is more than one image of this site. Click here to view images.